I like desserts as much as the next guy, but I don’t find myself preparing them too often, or any sweet dishes in general. I usually stick to entrées and side dishes. However, from time to time I surprise myself with a hankering for cooking up a unique dessert. 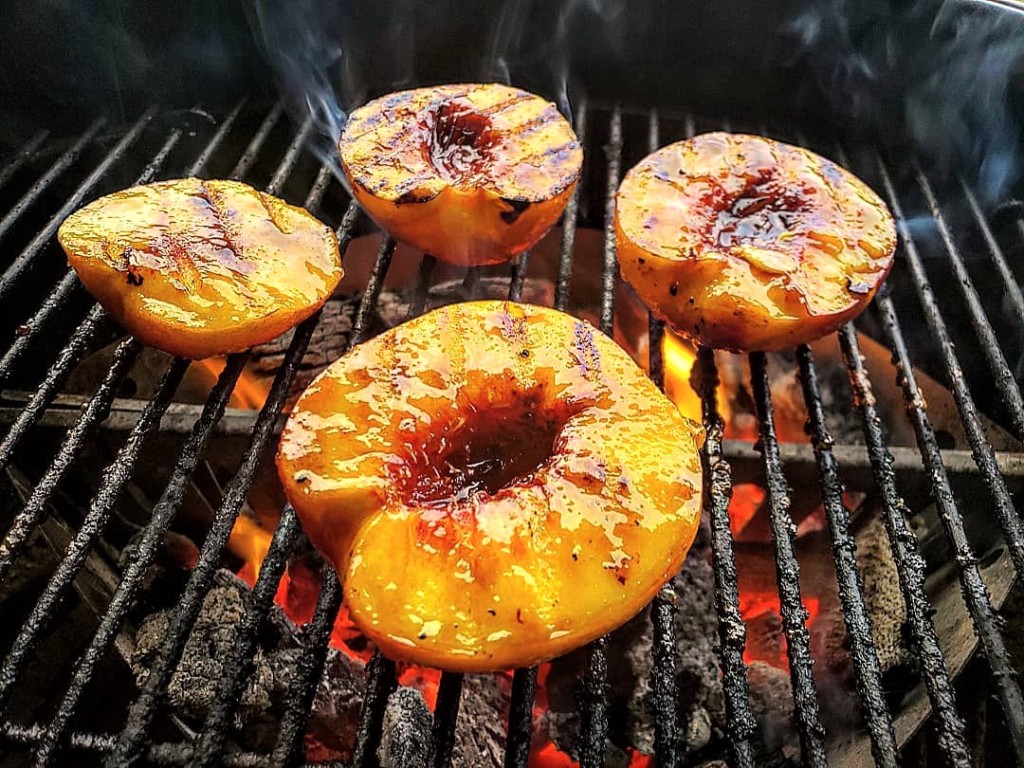 I didn’t come up with the idea myself, unfortunately. That credit goes to one of my old, good friends on social media. She wrote about growing up in South Carolina and how her family would prepare grilled peaches that featured a glaze made with bourbon and brown sugar for dessert. This enticed me, because it sounded delicious, and I knew I had to make it for my friends and family. I have cooked a multitude of vegetables over the years, but grilling fruit was not something I had ever considered before this interaction, but I was ready to give it a shot because I had no doubts about these peaches being delicious. So, after my inquiry, she gave me the basic rundown on how her family prepared them, but I went with my own twist, not without a little bit of side research in the process.

The night before I decided to toss some peaches on the grill, I searched the web for recipes, just as an idea of what other people were doing. It turns out, what I had in mind for what I was going to do was different than what others had to do. You will see why, but first, the recipe, because I know that is why you are here.

You only need a few things to make grilled peaches with bourbon brown sugar:

— Grill
— Peaches (I used 8 peaches since I was feeding a group of people)
— Chef knife
— Basting brush
— 1 cup of any type of bourbon (I used Fighting Cock Straight Bourbon)
— 4 tbsp of butter
— 4 tbsp of brown sugar
— Ice cream for topping them (optional, but highly recommended)

That’s it. It is a simple recipe and the steps to get it going are outrageously simple.

1.) Preheat your grill. I have only ever made these on a charcoal grill, not minding whether or not the temperature is too high. You may be different in me in that department. See, I like a little bit of charring; not too much, but enough to where the flavor of the fire is ample, because the sugar present in the peaches as well as the brown sugar on the surface is going to caramelize and become perfectly brown. If you are using a gas grill, set the heat to medium/medium-high. Using a charcoal grill, I recommend using a charcoal chimney to begin your fire. I used a mixture of briquettes and lump coals.

2a.) While your grill is preheating or as your charcoal is graying over with some ash, this is when the magic happens. You can do this earlier, but I like to get things going during the preheating process. When I researched other grilled peaches featuring bourbon and brown sugar, many of them recommended making the sauce to coat the peaches afterwards, but that is no fun in my humble opinion. I highly prefer my method because of the additional caramelization that happens on the surface of the peaches. Cut the peaches in half and remove the pits.

2b.) Add the bourbon, brown sugar and butter to a saucepan over medium-low heat until it begins to simmer. Stir occasionally, but be sure to allow the sauce to simmer for about five minutes until it adequately thickens. Afterwards, use a basting brush to brush the sauce onto the peaches. I prefer brushing them all around, but you can brush the ‘inside’ parts only if you prefer.

3.) If you are using a charcoal grill, dump the coals into one section of the grill for 2-zone cooking. Add your grill grate & allow it to preheat for about 15 to 20 additional minutes.

5.) Bring the peaches in and serve. Allow guests to serve with a scoop of vanilla ice cream if they wish to do so.

It is a simple, tasty treat to make, especially during the summer. Peaches, especially, are so refreshing with just the right amount of sweetness where you aren’t overloaded. When I made these, I had grilled some ribeyes for dinner, served with baked potatoes, and the crowd wound up going wild for the peaches more than anything else. I want you to read that sentence again, because yes, I just admitted that people favored the peaches more than the ribeyes. I’m still surprised.