Something to Consider Before Purchasing a Pit Barrel Cooker

When I make a decision on an investment in a product, the first thing I consider is the value of the product versus the price being asked for it. Secondly, and this coincides with ‘value’, I look into the quality of said product: is the brand reputable? Is it durable enough to last? With the time I’ll invest in using it, through enjoyment will I basically receive my return of investment through years of use?

My most viewed post is this one: Is Barrel House Cooker Going Out of Business?

When it comes to already-constructed, available-to-buy drum smokers, the two most talked about options are these two: number one, the most popular, is the Pit Barrel Cooker. Second, it is the Barrel House Cooker.

If you have been following my site, you will notice how often I have posted about Barrel House Cooker. I own both of their models, the 14D and the 18C. I have not held back from posting criticism when I’ve written about the cookers either, so while I’m an advocate, I’m no stranger to avoiding pulling punches in that side of things.

I don’t know what is going to happen with Barrel House Cooker. I am not knowledgeable enough about the legal side of things to comment abou what happened between them and Pit Barrel Cooker. All I know is that the legal conclusion to such matters resulted in portions of the proceeds of the sales of all Barrel House Cookers will fall into the pocket of Noah Glanville, creator of the Pit Barrel Cooker. Using Google, you can find more information about this that can expound on it better than I can.

For the majority of this year, I have noticed that Barrel House Cooker has not had their smokers on sale.

When I considered purchasing either the PBC or BHC, I went with the BHC because I felt it was a bigger bang for my buck. I have found it to be a superior piece of equipment for getting the job done as a drum smoker in comparison to the BHC. I listed my reasons why here.

I have stated in multiple occasions that, if my Barrel House Cookers ever fall apart, that I will likely go ahead and buy a Pit Barrel Cooker, because.. well.. I’m not sure if Barrel House will ever come back. Until they fall apart, I’m happier than a Texan surrounded by smoked beef brisket with using my two BHCs.

Pit Barrel Cooker has a much larger following than Barrel House Cooker. Asides from being available for a longer amount of time than BHC, one of the PBC’s main selling points is that it is a veteran owned operation.

As an American, I’ve been glad to support veteran owned businesses, but I can’t help but feel irked whenever certain companies try to over-emphasize that point when they are trying to gain business. It feels cheap to me. If your veteran-owned company is making a product that I feel is subpar compared to a competitor that isn’t veteran owned, I’m rolling with the the superior competitor. See the first paragraph of this post to consider why I say that. I am not interested in debating the moral compass guidelines behind these two companies, and neither should anybody else asides from those involved in the legal matters, yet if you Google the comparisons between the two cookers, you will find a horde of people stating their opinions while it is all hearsay.

Speaking of hearsay… onto the matters of the title of this post: Something to Consider Before Purchasing a Pit Barrel Cooker

If you take a look at the PBC website, while you will see the big, bold text in the site’s headlines, A VETERAN OWNED BUSINESS, this may mislead you to believe that the PBC is made in America while apparently the cookers and accessories themselves are made in China!

This information is allegedly only reported on tiny print on the packaging according to David H. from this site.

Others have confirmed. Consider what jfmorris from the Amazing Ribs forum said: 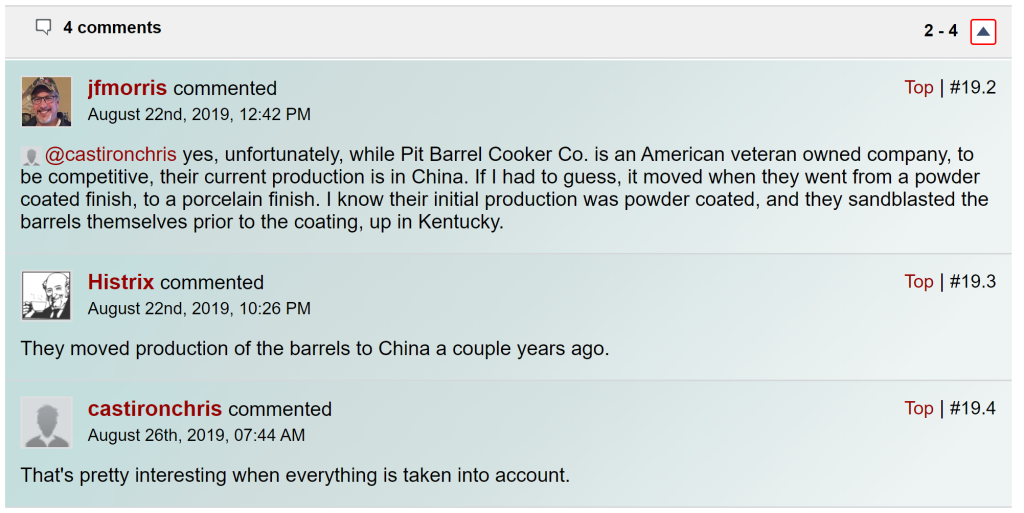 It is sheepish of consumers to lambaste Barrel House Cooker in one breath and place Pit Barrel Cooker on a pedestal in another. Two wrongs don’t make a right, but if you are a consumer who looks at a brand and pretends they can do no wrong, you are the problem. I am culpable, too, in a way, because I will choose the design of the BHC over the PBC any day of the week, but we should all aim to hold companies to higher standards and not give them a free pass just because its creator touts his military service history.